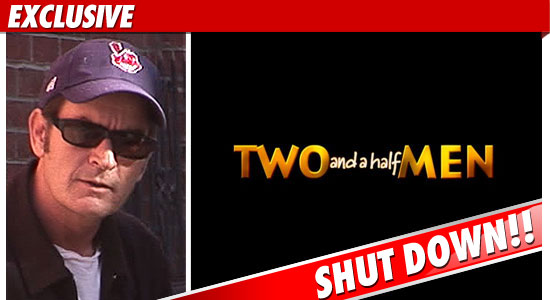 Instant Karma of the Day: In a joint statement released several minutes ago, CBS and Warner Bros. announced that, “[b]ased on the totality of Charlie Sheen’s statements, conduct and condition,” they have decided to shut down production of Two and a Half Men “for the remainder of the season.”

Earlier today, Charlie Sheen made a bizarre, potentially influenced appearance on the radio program of noted conspiracy theorist Alex Jones, where he made derogatory remarks about Two and a Half Men showrunner Chuck Lorre, calling him, among other things, “a stupid, stupid little man and a pu**y punk that I never want to be like.”

Looking back now, that may not have been the best idea.

UPDATE: TMZ claims to have received a letter from Charlie Sheen addressed to Chuck Lorre, in which the actor fans the flame of controversy by calling the Two and a Half Men creator a “contaminated little maggot” and wishes him “nothing but pain in his silly travels.”