Call of Duty 4 was Great so Modern Warfare 2 should be awesome?

Published by NiteMayr on November 5, 2009 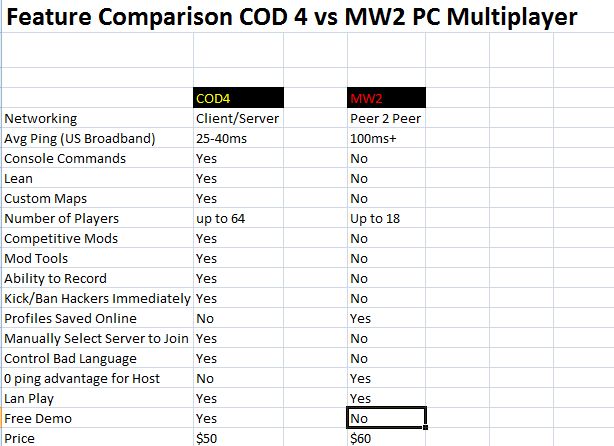 In this interview we get this gem:
Q – Ignoring IW.net, is the PC version a direct port of the console version?
A – Mackey-IW: No, PC has custom stuff like mouse control, text chat in game, and graphics settings.

No Mods, no console, no “lean” no self-hosting, no nothing.  You may as well buy the console, because it is piracy proof!  Wait, did you say piracy proof?  Why is it all over the net being played on hacked Xbox 360s?  Shoot!  Doesn’t that mean that this crappy negative-featured version is hobbled for no god-damned reason at all?  Yup!

Caveat Emptor or Why Can't I get a refund for Bad Movies?

I take offense at this:

“Or self-indulgent netizens who believe it is their God-given right to get all the music, films etc. they can stuff into their hard disks without paying the creators a single penny”

Caveat Emptor applies in many purchases, but when a product is defective or doesn’t deliver on it’s promised function, consumers can often return the product or at least obtain credit for their purchase. This is true for most physical purchases, perhaps not all.

However, when one buys media (music, movies, games) you end up in a hinterland. Say I’ve bought “Plan 9 from outer space” not knowing that it is camp and expecting a classic space horror (I live in a cave or something) I can’t return it to the store for a full refund. They won’t let me. However, if I watch it online or download it I can know if the investment was worth the money.

You may not agree with this, but at least you can see the sense of it. I think I’ve seen the basic content nearly 90% of the DVDs I own before I even saw the disc. Sometimes in the theatre (I vowed to never purchase the Transformers Movie (the first M bay one after that) and sometimes via other means.

However; in the cases where I went to the theatre I’m out 20-50 dollars depending how many people come along and the theater; I can’t recover that money in any way. It’s not just a foolish investment, it’s robbery. I was promised X amount of entertainment and instead I was bored or offended or even worse disgusted for X amount of time. I charge 60 dollars an hour for my wasted leisure time; where do I collect?

If groups like the RIAA can charge thousands of dollars for individually “stolen” songs, why can’t consumers have similar protections? These protections were invented for the Producers; the Pirate Bay and their ilk are the market reaction to these protections.

What I’m driving at is if consumers had the ability to receive refunds for bad media; it would go a long way to changing the mindset of people who download movies and music and so on.

Under the proposed bill, first-time offenders would face up to one year in jail and a $1,000 fine. Offenses would be elevated from violation status to a Class A misdemeanor. Repeat offenders would be charged with a felony.

State Senator Frank Padavan also argued that money from piracy has flown from organized crime syndicates to purposes threatening national security. “A lot of this is going to terrorism,” he said, citing Islamic group Hezbollah as one beneficiary.

In a moment that drew laughs, Lentol urged citizens to stop supporting film piracy even though some stars make $20 million and more per film, then turned to Fey to ask: “Is that what you make?” The reply was loud and clear: “Nooo!”

“It’s not about studio executives, it isn’t about movie stars or anyone else who rides in limousines,” Lentol said. “It’s about the assistant make-up artist” and other hard-working entertainment folks who may lose their jobs if piracy continues at current levels.

Clearly, the Movie industry is going to pack up and stop making films if Piracy continues. Sure. Instead the answer is to jail 20-somethings when they film short clips of movies using their camera phones and frisk people as they enter a theater. That’s the way to behave.

People like to remind folks in the service industry that “they pay their bills” well, Movie Industry, without an audience, you have no money. Prosecuting your customers is no way to make money.

I buy every movie I like. Without fail. I had as many as 600 DVDs in my collection before I moved back to Canada. I still have something on the north side of 400 on hand. I love movies, but hate the industry built up around it. Not in some “Corporations Bad” kind of way, but in a “I pay for that crap and I am still treated like I’m their employee and have to follow their rules” kind of way. Face it Movie Industry, we’re your Daddy/Mommy and you have to do what we say, we pay your allowance.

And in some form of Bullshit Bingo winning maneuver they linked it to terrorism.

Maybe she should try, I dunno, making money from TV or something.