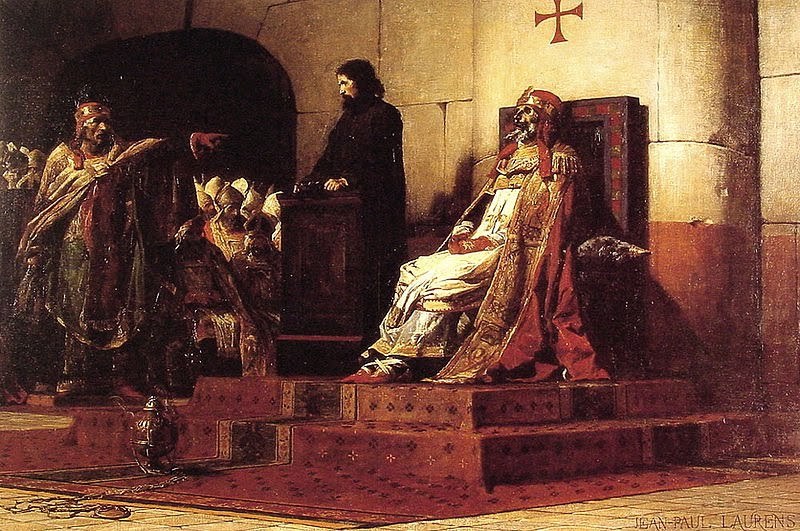 This is exactly what it looks like, an intervention for necrophillia, here the Pope accuses the former pope of being (in his words) “Too Sexy”

This is exactly what it looks like, an intervention for necrophillia, here the Pope accuses the former pope of being (in his words) “Too Sexy”

That night, I finished up the final touches on my part of the Website revamps at home and sent merged my work to the CVS on my own branch.  I’d let the source control teams check it in and make sure it was to spec.  Mitzi called me about an hour later and told me that he appreciated my work.  I kicked back and watched some History TV that I’d recorded earlier, “The Lives of the Popes”.

Billy called around 9 o’clock.  “Hey man, I got one of those Pope things cornered in my bathtub, can you come over here and take it out of my place?”  He sounded frantic.  Billy wasn’t stable on his best days, he wouldn’t sleep if a Pope was in his house.

“Sure Bill, I’ll be over there in a bit.  I’ll catch a cab and be there as soon as possible” I hung up and grabbed some clothes and my Laptop; if Billy was too worked up I’d have to sit with him for a few hours and probably end up on his couch for the night.  Being prepared was best.

About 20 minutes later I knocked on Billy’s Door; it had a huge inverted cross with a barbie hung on it.  Easy to find.

Billy yanked the door open on the second knock and pointed, shaking and eyes closed at his bathroom door.  Crouched in the dirty tub was a foot tall John Paul II, peering down the drain and saying “Hello, my child?  Are you there?  Do you want the blessings of God?” He proceeded to turn and lift his cassock, bareing his tiny bum to the drain hole and dropping his “blessing” down the pipe.  I turned on the hot water to wash away his leavings and snatched the smelly pontiff from the floor of the bathtub.

“No, No! I must bless the filthy beasts!” the tiny pope protested, beating at my hands.  The Pope squirmed and protested, but It was for nothing.  I snatched his head and wrenched it around, killing the tiny Priest as quickly and quietly as possible.  It never got easier, but the big ones were trouble,  a benedict had gotten into the trash a month ago and set off a roach infestation that was still going on at Billy’s.

Billy peered from around the bathroom door, “hey man, is it done?”

“Billy, you gotta start taking care of these guys, you’re gonna live in fear of them until you stand up for yourself” I sighed and stuffed the miniature pope into a green garbage bag. “They don’t seem to attack you or anything, they just show up and start blessing the plants and bugs.  Do they talk about anything else?”

“Man, I’m telling you, when they catch me alone they tell me they are gonna take John’s soul and kill me!”

Billy began to tear up, his eye already wet.  He bubbled and shook then collapsed into a wailing heap.  I got him to his room and closed the door.  The living room was a mess of blankets and bongs.  Billy’s tastes ran from Grateful Dead to Nine Inch Nails, and his walls suffered from the clash of Inudstrial Nihilsm and ‘Shroom-fed Hippy Optimism.  I picked up a bit and settled onto the couch to surf a bit.  I listened for Billy to stop crying and when he had finally given up, he stalked into the bathroom and wiped himself up.

Billy sat next to me on the couch and harumphed.  I leaned back and waited for him to talk.

“You know what? The next one of those fuckers that appears?  I’m gonna strap it down and make it tell you what it is here for!  Yeah!”

“Sure man, It’s getting late.  You mind if I couch surf here until morning and head to work in the morning?”

“Sure man, you can watch for the Popes!”

Billy brightened a bit and watched some TV; he smoked a bit of really rank weed and went back to bed.

When I was sure he was in bed I IM’d Mitzi and told him what had went on.

“Does he know what’s up?” Mitzi asked.

“No way, I just let him go on and on, but he doesn’t have any idea” I tapped out.

“Alright, we’ll see how he is in the morning then, Thanks for the update” Mitzi signed off and I closed the laptop.

Out of the corner of my eye I saw a 3 inch tall, naked man stroll accross the floor, whistling as he went.  Too tired to care what ancient religious figure it might have been, I obliterated him with a shoe and went to sleep.