Does anyone else wonder what happened to this lady who hated Obama and Obamacare?

Does anyone else wonder what happened to this lady who hated Obama and Obamacare? 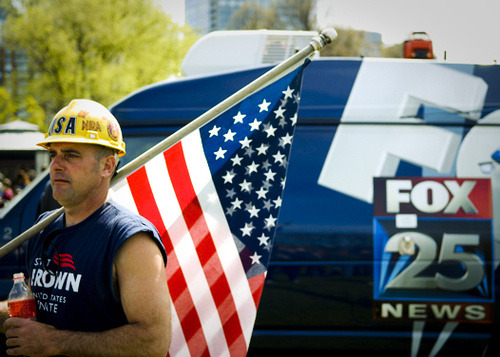 I know what you’re thinking, the steel worker from that Mill in Springfield, right? Me too. They Work Hard, they Play HARD.

I know what you’re thinking, the steel worker from that Mill in Springfield, right? Me too. They Work Hard, they Play HARD.

In Case you aren't getting it yet

What’s hilarious about the teabaggers, though, is how they never squawk about waste until the spending actually has a chance of benefiting them. You will never hear of a teabagger crying about OPIC giving $50 million in free insurance to some mining company so that they can dig for silver in rural Bolivia. You won’t hear of a teabagger protesting the $2.5 billion in Ex-Im loans we gave to GE through the early part of this decade, even as GE was moving nearly a hundred thousand jobs overseas over the course of ten years. And Michelle Malkin’s readers didn’t seem to mind giving IBM millions in Ex-IM and ATP loans at the same time it was giving its former CEO, Lou Gerstner, $260 million in stock options.

In other words teabaggers don’t mind paying taxes to fund the salaries of Bolivian miners, Lou Gerstner’s stock options, deliveries of “sailboat fuel,” the Hermes scarves on Sandy Weill’s jet pillows, or even the export of their own goddamn jobs. But they do hate it when someone tries to re-asphalt their roads, or help bail their slob neighbor out of foreclosure. And God forbid someone propose a health care program, or increased financial aid for college. Hell, that’s like offering to share your turkey with the other Pilgrims! That’s not what America is all about! America is every Pilgrim for himself, dammit! Raise your own motherfucking turkey!

And once again, Taibbi:

You know you’re a peasant when you worship the very people who are right now, this minute, conning you and taking your shit. Whatever the master does, you’re on board. When you get frisky, he sticks a big cross in the middle of your village, and you spend the rest of your life praying to it with big googly eyes. Or he puts out newspapers full of innuendo about this or that faraway group and you immediately salute and rush off to join the hate squad. A good peasant is loyal, simpleminded, and full of misdirected anger. And that’s what we’ve got now, a lot of misdirected anger searching around for a non-target to mis-punish… can’t be mad at AIG, can’t be mad at Citi or Goldman Sachs. The real villains have to be the anti-AIG protesters! After all, those people earned those bonuses!

Don’t know about you, but given the choice, I’d rather be an elitist than a peasant any day.

What a set of Brass ones, to make Tea with!