Could Canadian “Tea Party” folks be far behind? 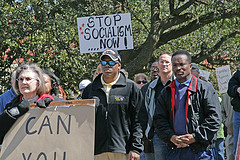 For those of us who cannot affored to travel to the United States for private health care are left with only one choice, the government’s health care. And when you only have one choice, you really have no choice whatsoever.

Let’s dissect this notion as it presented:

Face it; with few exceptions, ensuring that every Canadian has access to the same level of care is at least more equitable than allowing the more affluent to bypass the line.  There’s nothing like a Queue to level the playing field.