Bart, Bart, Bart.  If only you had kept your head down and just voted no.  Then all of this would have just blown over; you would be principled and no one would care that you live in a house funded by a secretive religious organization and no one would be calling you a baby killer today.  For the most part anyway.  You could have gone out afterwards and spread all kinds of hellfire about the bill and how it was evil and looked (to the more conservative types) like a white knight (instead of the shitheel traitor you appear to be now, right)

The crux of this being that some folks don’t want their tax dollars used to kill babies;  let’s take us a litmus test.

If you “support the wars” you can’t be against tax payer funded abortion; right? 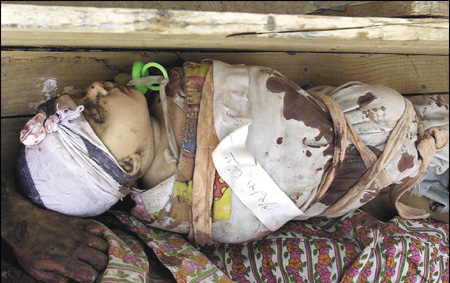 If it is okay to kill this baby with a bullet or bomb paid for with your income tax, surely it’s okay to abort a baby who doesn’t even have a chance; correct?

I believe that only the Iraqis can solve their own internal conflicts, bring peace and establish stability in their country. One of our nation’s great resources, our young men and women, are caught in the middle of a civil war, which can only be solved through political reconciliation, not through further military involvement. The Iraq war has now lasted longer than World War II and it is time to begin bringing our troops home.

In summation, I will continue to pressure the Administration and the Iraqi government to end this war, which has gone on for too long without any clear plan for resolution, and I will continue to vote to end our military involvement in Iraq. Further, as long as there are U.S. troops in Iraq, I will ensure these troops have the resources they need to protect themselves, complete their mission and return home safely.

How about that for Bart!  At least on paper he seems semi-consistent.  Good for him, now go tell it on the mountain and remind everyone that you are at least being consistent Bart.