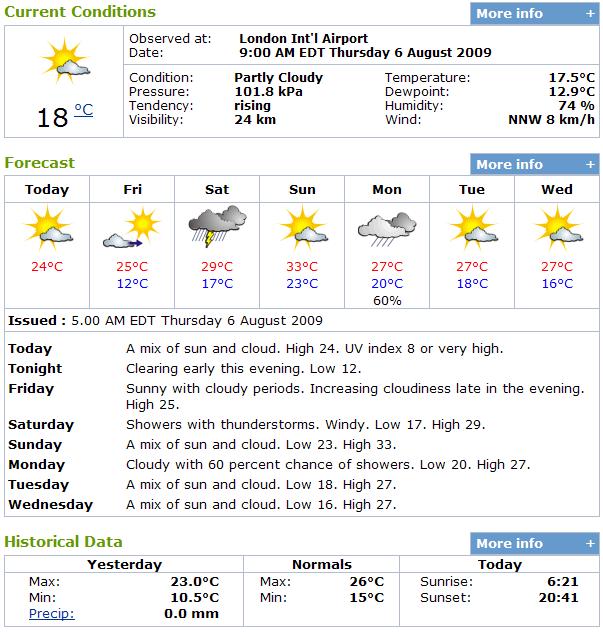 Do you see that Low from yesterday?  10.5 Degrees.  Just 8-9 Degrees from wet snow.  BRRRRRRR.  I’ve went this entire summer with the Air conditioning off at night (when it was left up to me) can you see why?  Sunday looks great, but given the rain all around it, I’d it’ll be raining anyway.

If I was making a Modern Highschool Romantic Comedy…

I finally turned on the Genius Bar to make some playlists this weekend, it took ages to scan and can my collection; but in the end I was happy with the playlists it was creating based upon songs I picked in my library.  Driving home listening to one of these lists I wondered, if Wes Anderson had the Genius Bar, how would his soundtracks look?  Would Zach Braff’s “Garden State” sound the same?

Then I meandered away to; what if I was using the Genius Bar to make a movie soundtrack?  What would the movie be about?  I thought about it a bit and decided that I would like to see a movie where a Nerd Girl falls in love with the cool Librarian at her school, he’s a student and a nerd.  However; they are both ugly as boots and ostracized by the school population as a whole.  The only problem is that the guy, Library Boy (Aaron) has become so twisted that he is a total misanthrope and unlike Christan Slater in Heathers, isn’t cool and self-assured along with it.  Both of them are clumsy and awkward, but only Nerd Girl (Jilly) is capable of normal human interaction, Aaron having long given up on people.

Jilly tries to get Aaron to interact with her; taking on his interests (the ones she can figure out) and reaching out to him through his younger sister (who is almost as odd and withdrawn as Aaron, but not so much that she doesn’t appreciate a friendly person).  Through perseverance and understanding Jilly convinces Aaron to come to her house and just hang out.  While watching TV on the couch he leans over and kisses her, music swells its “Let Go” by Frou Frou, he breaks off the kiss says “There, are you satisfied?” and turns back to the TV.

Jilly settles back for a bit and considers the matter, ugly or not she has a great personality and she doesn’t need to settle or fix this kid.  She tells him that she’s had enough and asks him to leave, he says “fine” and takes off home.   Jilly gets off the couch, calls a girlfriend and they make plans for the nearest ComicCon,  Jilly meets a nice Pokemon cosplayer named Janice they hit it off, at the end of the ‘Con Janice takes off her cosplay head, they kiss “Let the Drummer Kick” by citizen cope plays over the camera pull away as Jilly narrates Aaron’s total withdrawal from society and her own happiness with Janice.  “You can’t predict when love is gonna drop on your head, but when it does don’t  jsut let is bounce off you thick skull. Okay?”

The whole movie is narrated by Aaron’s younger sister and she narrates Jilly watching Aaron during the opening with:”You can’t predict when love is gonna drop on your head; and sometimes when it does you need to just cover up and run away. Okay?”

So Here is the playlist the Genius Bar made around “Let Go” by Frou Frou.  Obviously not all these songs would end up in the movie; but couldn’t you see My Moon is My Man playing over a long “girl staring at guy” scene, maybe a montage of girls and guys staring at each other around differing settings?  Maybe “Le Disko” playing over the Comic Con?

I think the Genius Bar did a fairly Good Job here, Wes Anderson: your muse.