The New BSG sucked, and you know it

After the new BSG (Battle Star Galactica) premiered all the hardcore Nerds I worked with proceeded to lather themselves up in a frenzy over how awesome it was.  I was passingly familiar with the “Original Flavor”  BSG from the 70s and the two things that were acceptable about that (three if you count Lorne Green)  where the Cyon Space Fighters (the toys were great) and the Bear-Dog-Cyborg Daggit.  I Confirmed it was called Daggit using IMDB which has actual editors and not Wikipedia because even I’ve altered the basic facts about a real person and they stayed in place for weeks.  No, I don’t think Strom Thurmon led the First Autogyro Kamikazi squad, but for a while there his Wiki said so [No it didn’t I’m not about to to own up to the actual edit I made, what would be the fun in that?] Anyway, I was familiar with the Magic Underwear angle on the original and decided to avoid the “new one” because I figured that it would end up being some form of Religious Propaganda. If I wanted to watch a show about people on the run from Robotic Religious Zealots, I’d just finish my 700-Club/Litellest Hobo mashup video.

I watched episodes here and there (I’m not so closed-minded that I wouldn’t give it a fair shake)  and felt fairly justified in my “Oh Gee it’s the God Bots versus the Sinner Fleshbags”  opinion.  With all the Greek allusions they at least tried to make it not all about the big Granite Temple, but in the end the new BSG was all about the Magic Underpants and while I was correct; I wish I hadn’t been.  Because when you take the eschatology out of it, the New BSG could have been an alright SF series; the actual actio sequences were fairly good and the Characters were at least, oh hell I can’t even lie that I liked it.  It was crap from top to bottom and filmed by an insane 8 year old with a machine and switched focus  fetish.

The Jumpy camera work and “fun the first time, but crappy forever” blurry and or shaky over the shoulder camera work were just the signature moves of the “we have no content” writers and producers of this show.

The thin characters, the Deus Ex Machina writing.  Why did anyone like this crap?   It came so highly recommended I can only posit that there was some form of addictive substance in the initial broadcasts, and like “Extra Tasty Crispy” formula, people were hooked.

You now what? I could really go for some KFC now. 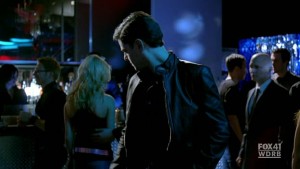 Silverman can No Longer Help

“When we asked what the rationale was, we were told, `We don’t have to give you a rationale.‘”

Rogers has been steadily building a media empire the likes of Clearchannel or Newscorp in the US.  With that growth seems to be the ever-increasing “corporatism” that I noted in my post over on vox (http://nitemayr.vox.com/library/post/what-corporations-sometimes-are-like.html).  That is to say the culture becomes very insular and profit focused, forsaking tangible goodwill for monetized good-something.

“We have more user-generated content than ever,” argued Haggarty. “We’re not any less committed to defending the consumer. We’re reviewing and relooking at everything. This is all just a part of the process.”

As if user-generated equals actual parcipitation.  I could pull a bunch of youtube video and call it user generated too.  CityTV and Much built a great deal of their cache on the backs of the kids and soccer moms that seemed to orbit the Queen and John studio in waxing and waning numbers, it appears that the Rogers folks are looking to turn that culture into a “Good Morning America” type culture where they set the hours for participation from the audience.  The death of “Speakers Corner” and “Silverman Helps” seem to be setting that path ahead with increasing clarity.

CityTV under Moses Znaimer was community-focused and accessible.  It remains to be seen what the Red and White of Rogers will do to the nigh-institution of City.

Quotes pulled from this article at “The Toronto Star”:

Who’s the most annoying person on TV?

It’s a toss-up between Glenn Beck and Nancy Grace.

They really have no place on CNN, and should move to Fox.
I had Two guys sign up for Vox just to comment on this, in reverse order “John Hampton”


ALL of you DUMMIES have GOT to get remote controls for your TVs so if someone as smart as Glenn Beck comes on and makes you think, you can go back to your vegetative, “let someone else handle the world’s problems” state of mind!! Smoke a little more weed. All you have to do is CHANGE the CHANNEL! No viewers? ratings go down! You following, or need I repeat …Ratings go down? Advertisers begin looking elsewhere to promote their product. Capische? Advertisers go down? BECK goes away…(way)…(way)…(ay)..(ay).. a…

Just out of curiousity, why do they “really have no place on CNN”?

You guys are both, INCREDIBLE ASSHOLES!!! Yay!

You can pick up your prize over at the VA.  Have a good one, and thanks for making a big deal out of an offhand comment.  I’m glad you joined vox just to comment on my one sentence condemnation of the pointless and inflammatory Beck and Grace.

Maybe Vox will make some money off of you both, granted I imagine you are both some kind of sock puppets.  So, good on ya, either way.

Oh, I should also point out that I am incorrect, they have no point on “Headline News”; which should stick to it’s “news every 60 minutes” format and just dump the “Shows” altogether.  I like the snippets format they use in the morning and lets me get the minimal dose of national and international news that I like before I see the ‘net.

Glenn Beck and Nancy Grace are “personalities” who belong on a personality-driven news channel.  “HEADLINE NEWS” used to be a news driven channel, now it is personality driven, in the evening.

I only know those two by name because I can’t avoid their non-stop commercials.

I was hooked by Tony Soprano way back when, and now I’m just left wondering.
The Sopranos ended for me, like it began, in the middle of something.  I caught something with Christopher in some early episode, and got hooked on it.  Tony swaggered into Dr. Melfi’s office and I didn’t stop watching.  The Drama surrounding Tony’s Mother reminded me about the troubles my Family had with my Gret-Grandmother as senile-dimentia took over her mind.  AJs constant struggle for approval in Tony’s eyes, and their strained relationship reminded me how hard it has been in the past to connect with my own Dad, which I think we’ve done.

I watched the Sopranos because they were a family, a family with Drama beyond my own, but a microcosm of all the Drama around me, sometimes exaggerated, sometime eerily close to the bone.

There was fraternity and honor.  Something we all respect, in proper context.

There was loyalty and laughter, which we all could use.

Then there was the crime.

We all indulge in little crimes, sometimes without meaning to.    When we see Tony reap the rewards of large and (sometimes) bloodless crime, especially against a larger institution, we got a thrill.

And all we are left with is a long cut to black.

Perhaps that was for the best.

EDIT: A more succinct statement on the ending

That’s a great deal of Fox.  Simpsons is number 6.

What TV show(s) will you be watching this season? Why?
Submitted by ducnly.vox.com.

House: I’m a total addict and am a medical mystery freak.  I love the character too, ascerbic is awesome.

Simpsons: Come on, of course I’ll watch the Simpsons after this long you don’t break that habit.

Venture Brothers: This season is actually just about done, it has been great thus far.

Scrubs: This may be the last season, but I have loved all of them thus far.

Ghost Whisperer/Medium: I won’t be watching them (if I can help it) but My wife loves these; I just can’t get past the “Lifetime Network” feel to them, they are like X-Files for Hausefraus.

Legion of Super Heroes:  New Show, I enjoy the Warner Brothers/DC Cartoons (Except for Teen Titans)

The Batman: A good adaption of Batman that seems to keep getting better.

Avatar the Last Airbender:  Good show, good story. (I don’t DVR this one)