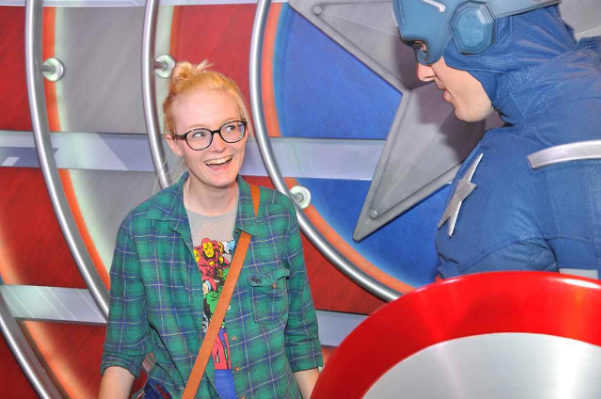 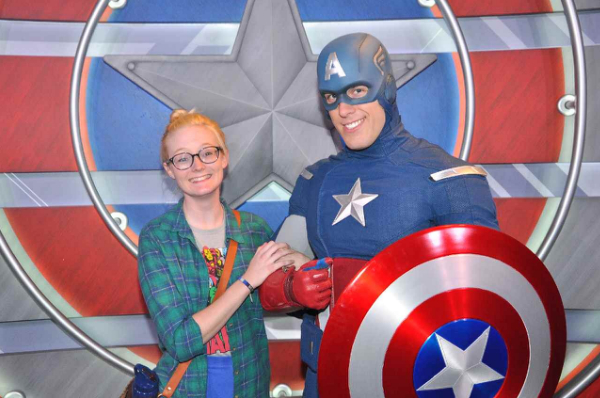 Yesterday, I went to Disneyland. Apparently, at their Innovations building, there is a HUGE Avengers exhibit, complete with appearances by Captain America and Thor. Naturally, I ran screaming into said building, camera at the ready. After falling on the ground in front of the array of Iron Man suits and bursting into tears at the Steve Rogers exhibit (exactly like the Smithsonian one in TWS) I got in line to meet the Star-Spangled Man. (The workers were all awesome, they loved that I was such a nerd and so unbelievably excited to meet the Captain.)

My purse has a large Doctor Who pin on it, (not pictured) and the camera man for Steve pointed at it, looked at Cap, and was like “Look at this, it says something about she’s a Doctor?” and Cap points at it and goes “Oh, that looks like a blue police box!” so I said, (I was speechless guys I literally am such a dweeb) “It is.” and he said “When I was in England doing an Op in 1942, I was stuck in a burning building and a man named John Smith pulled me out of the building, and then ran into a blue police box just like that and disappeared. Do you know if this has anything to do with that?"

anyways, we took pictures, i cried when i walked out, thought you all ought to know. the end.