I’ve been enjoying the “Dark Reign” crossover storyline; so much so that I look forward to what I get to read of it from time to time.  In Dark Reign: Fantastic Four #2, Reed is scanning the Marvel Multiverse looking for answers to where he went wrong and it looks like he’s coming to “I’m so smart, I can’t fail” as the answer.  Look for “Evil Reed” to show up soon.

What do I do about this?

This outline includes a meal I haven’t eaten yet 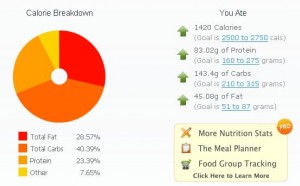 What do I do about this?  Just accept that I’ve only had 1400 calories today and move on?  Won’t that Starve my system into holding onto calories?  What should I do in this situation?

Fringe this week did little (overtly) to move the over-arching plot along. However, there was a bit of covert 80s and 90s action to check out!

Hey! Becky! Almost didn’t recognize her until she sneered; that sneer is going to be burned into my memory for years. OH HOW I HATED THIS BECKY!  When Sarah Chalk took over, I was a fan of Rosanne again; I will admit that Alicia Goranson was a better fit for the character, Canadian Sarah Chalk was too pleasant (which is why I preferred her over snarky scowlpuss here)

Anyway; this episode had two hairless freaks in it.  One is involved in the main plot. so I won’t spoil him here; but check out who appears for a few moments on screen again:

The Witness is here again to watch over the proceedings again; this time from the sidelines of the episode.

There was one clunker of a line in the episode when a character (Played by Erik Palladino of Law and Order) walks out and says to his cell phone “I’m at the hospital, we have another one”

WHAT HOSPITAL?  This is Boston right?  Aren’t there more that one?  Another What? That isn’t enough information for a phone that doesn’t contain a greeting or jargon.